Not only in Europe but also in the United States investments are made into research in order to reduce harbour-related emissions while at the same time economic growth is being pursued.

Besides the primary advantages, lower investment costs and higher performance, with the new stack overhead cranes from the NGICT-concept of Koch Consulting Group a big step can be taken in the worldwide strategic goals to achieve a significant reduction of negative environmental impact. During recent years, the integration of renewable energy and alternative fuels within the transport sector has been strongly initiated and supported. Nevertheless, the results stayed behind the goals. High costs are reported as the most important cause. Which is understandable as all parties involved are starting from the current situation.
Therefore in this way the 20 / 20 / 20 objective will not be reached (20 / 20 / 20 means 20% less greenhouse gas emissions, 20% of all energy from renewable sources and 20% less energy consumption).
The harbour logistics could play a big role in this. Converting the current equipment is not the solution. Switching to a new concept is. In the NGICT-concept of Koch, this can be done in phases without frustrating the normal write-off periods.

The idea of Koch to convert a traditional stack area at an existing terminal into the NGICT-concept in phases has a high implementation potential paired with a significant energy reduction. The energy savings are being achieved by the much lower own weight of the means of transport. The OHBCs from the NGICT-concept have an own weight of approximately 65 ton, as opposed to 235 ton for the most modern automatic stacking cranes such as for example the RMGs at a span of 9 to 10 containers wide. The figure below shows the calculated difference for a stack lane of approximately 300 meters long and approximately 30 meters wide and an operational time of 4.500 hours per year. Exact figures of course depend on various assumptions. 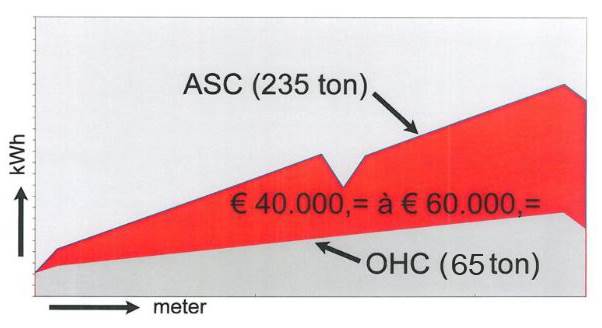 Energy savings per crane per year in a stack lane on crane driving and mainhoist.